In the legal field, craftsmanship is usually referred to as “know-how” or “trade secrets”.

Unlike trademarks, copyright, designs and patents, trade secrets – which are an integral part of the creative strategy of 75% of companies in the European Union (“EU”) – do not currently benefit from strong protection granted by a harmonised and set framework of rules. 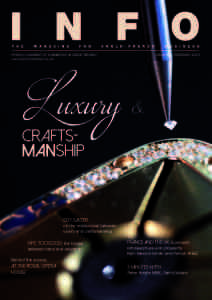 As a result, at the end of 2013, the European Commission proposed a new directive to harmonise the protection of trade secrets in the 28 member-states of the EU.

The directive on the protection of undisclosed know-how and business information (trade secrets) against their unlawful acquisition, use and disclosure, will protect trade secrets, being information that:

– is secret, in that it is not generally known or readily accessible to relevant persons in the field ;
– has commercial value because it is secret; and
– has been subject to reasonable steps to keep it secret.

The acquisition of a trade secret will be unlawful in a range of circumstances where it is a result of breach of a confidentiality agreement or other practice “contrary to honest commercial practices”.

A common set of remedies where there has been unlawful acquisition, disclosure and use of trade secrets, such as interim and permanent injunctions, seizure and destruction of goods which result from the misuse of trade secrets and damages to compensate the trade secrets holders for losses suffered, will be implemented by the new directive. Another key change introduced is that some procedures will be in place to ensure the confidentiality of trade secrets during legal proceedings.

Many legal practitioners hope that the new directive will come into force in 2015, and then implemented by each member-state by 2016.

The directive is good news for businesses, especially those focusing on craftsmanship. The new minimum level of protection for trade secrets will give them greater certainty that their trade secrets are safe and may facilitate cross-border investment and innovation. However, these changes will not remove the need for confidentiality agreements, especially as a pre-requisite to the exchange of valuable confidential information. Article Name
Protection of trade secrets and craftsmanship: what is in the works?
Description
Unlike trademarks, copyright, designs and patents, trade secrets – which are an integral part of the creative strategy of 75% of companies in the European Union (“EU”) – do not currently benefit from strong protection granted by a harmonised and set framework of rules
Author
Annabelle Gauberti